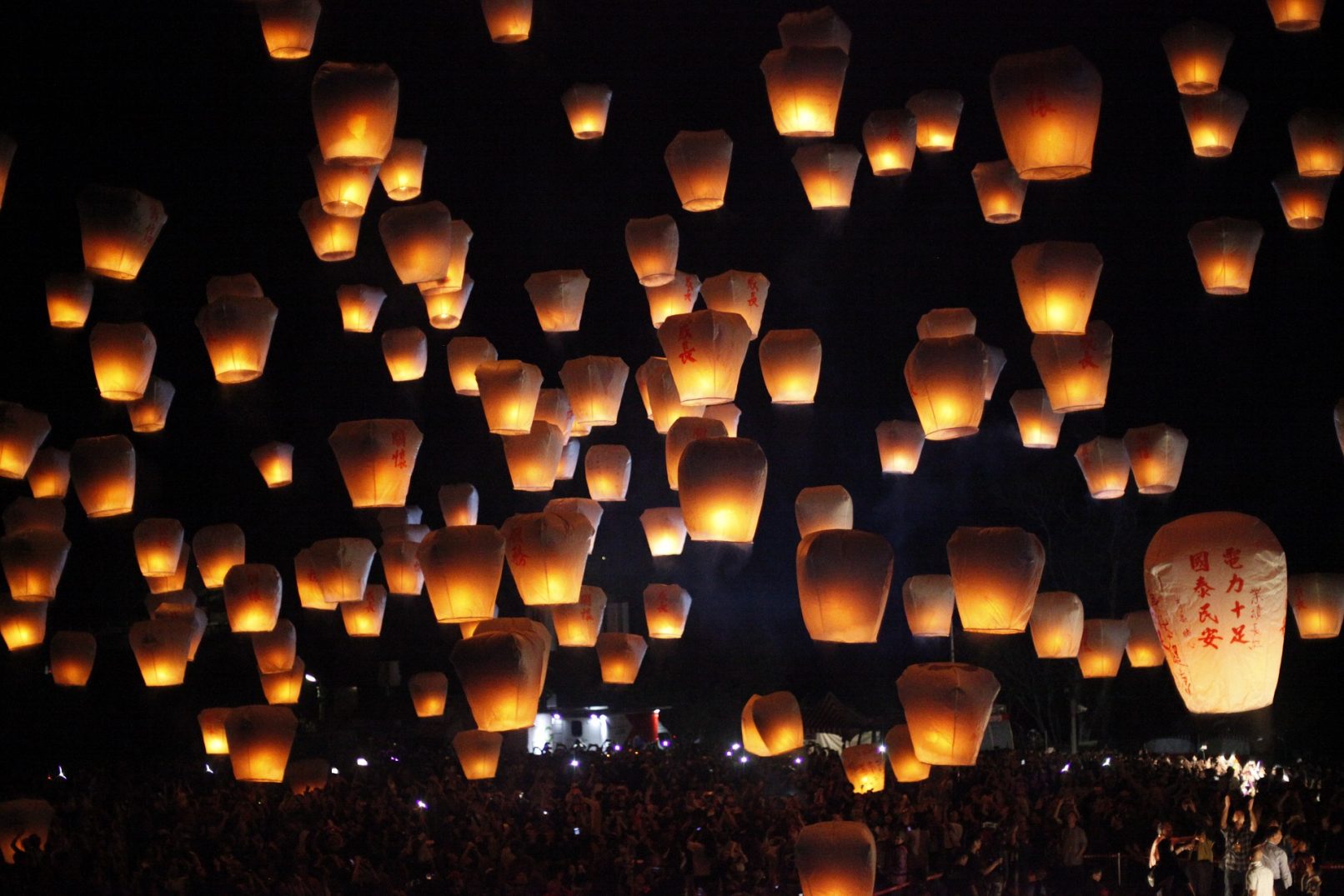 Thousands of flying lanterns with handwritten wishes are released into the sky at the festival. Sky lanterns are scheduled to be released together at eight different times after dusk.

Ping Xi, a village about 30km from Taipei, is historically known for sky lantern-flying rituals in Taiwan.

In this village, that can be traced back to the 16th century, sky lanterns were used to deliver messages during war or when it was invaded or attacked.

Traditional lanterns were originally used by soldiers and officers to protect candles and oil lamps from blowing out in the wind. In the last 30 to 40 years, they have been widely appreciated as a form of art.

Today, during Ping Xi’s 20th annual Sky Lantern Festival, a new generation of 25-year-olds is experimenting flying their lanterns, made entirely of paper, that are also environmentally friendly.

They used paper instead of iron wires and bamboo laths so that the material burns out completely before it hits the earth again in order to avoid causing a fire.

Hours later, thousands of flying lanterns are released into the sky by the visitors – a mix of locals and foreigners.

At this year’s Taiwan Lantern Festival, there is a wide variety of lanterns on display.

Traditional ones shaped as balls or buckets have now been converted into diverse postures of animals, figures, vehicles and nature scenery.

Huge art installations have also attracted people of all ages.

This year’s event also brings a combination of sound shows with lanterns. 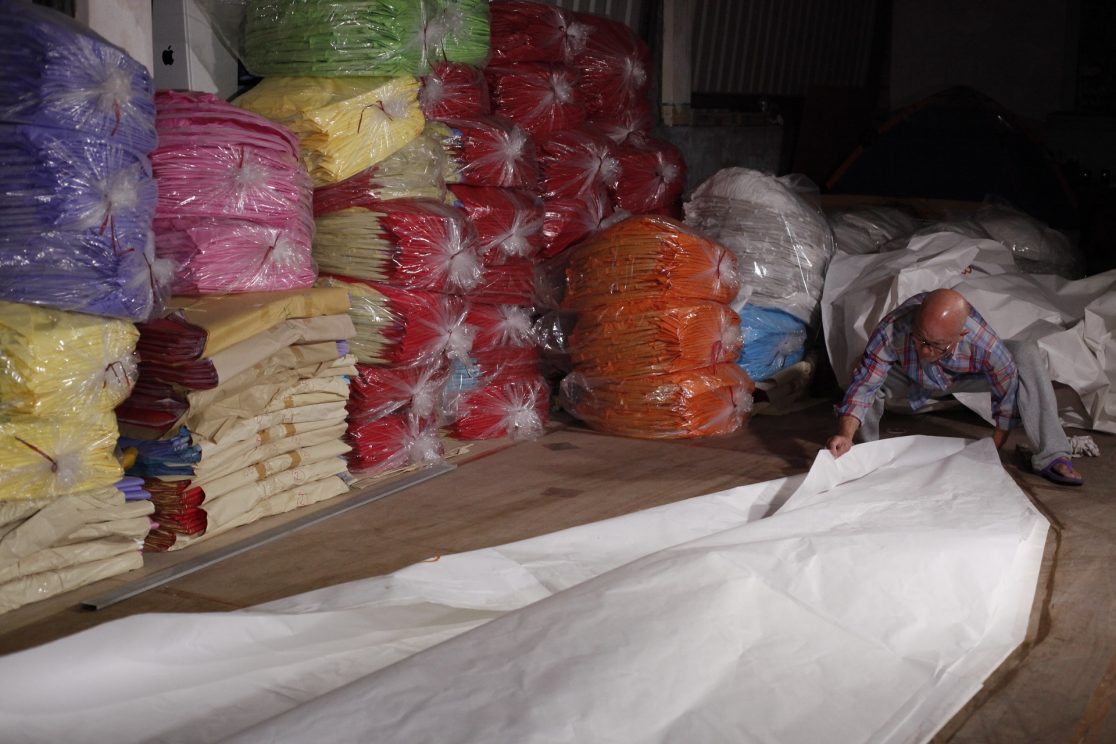 'The closer I get to finishing a huge sky lantern, the more fearful I get of it being be destroyed by mistakes.' Experienced lantern-maker Min Shu Hu makes one of the two 15-feet-tall sky lanterns in his studio for this year's festival. He said it was best to make huge lanterns deep in the night. He secretly learned how to make lanterns himself in his early childhood. He now takes charge of the annual Sky Lantern Festival’s main lanterns. 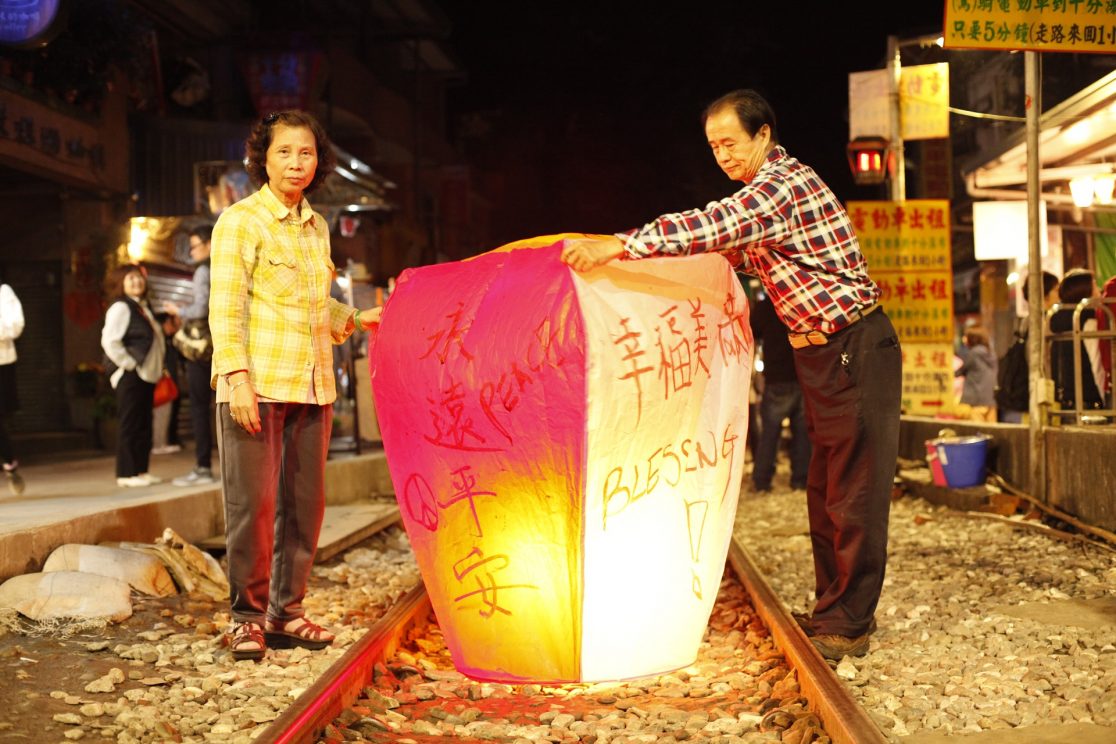 Guo He Lin was born in 1949 and spent his entire life in Ping Xi. 'A person should keep his faith.' He insists on making traditional flat-roofed sky lanterns. His wife makes palm-sized cloth sky lantern ornaments. Their children do not share the same sentiment and choose to instead work in the financial industry which offers more attractive benefits. The couple feels fulfilled for having consoled devastating earthquake victims by rituals of flying their lanterns, and donated their incomes to organizations that care for people in vegetative states. 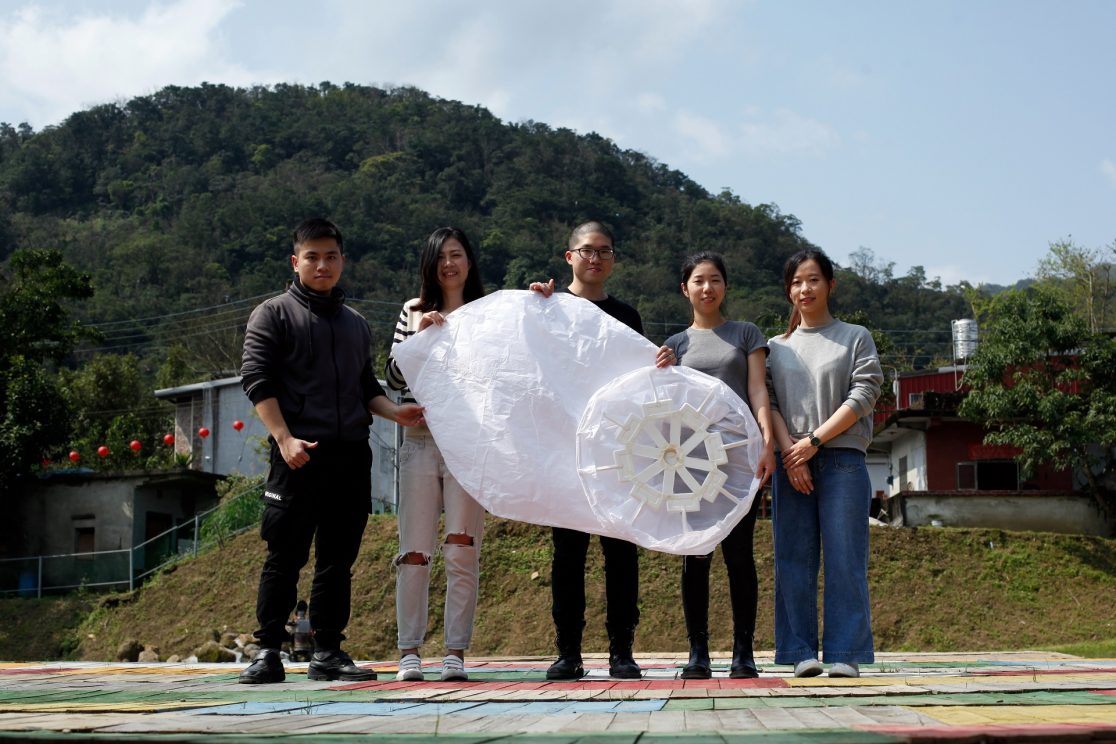 After about 18 months of trials and studies, a group of creative lantern enthusiasts going by the name 'Bank of Culture' prepare to conduct an experiment, flying their sky lanterns made entirely of paper and ignited by peanut oil. These sky lanterns are said to be more ecofriendly and less prone to causing fires when falling down in the mountains, balancing the importance of protecting the earth with keeping the tradition alive. A single paper lantern bottom, which replaced a traditional one made of iron wires and bamboo laths, is made of pieces from eight meal boxes. 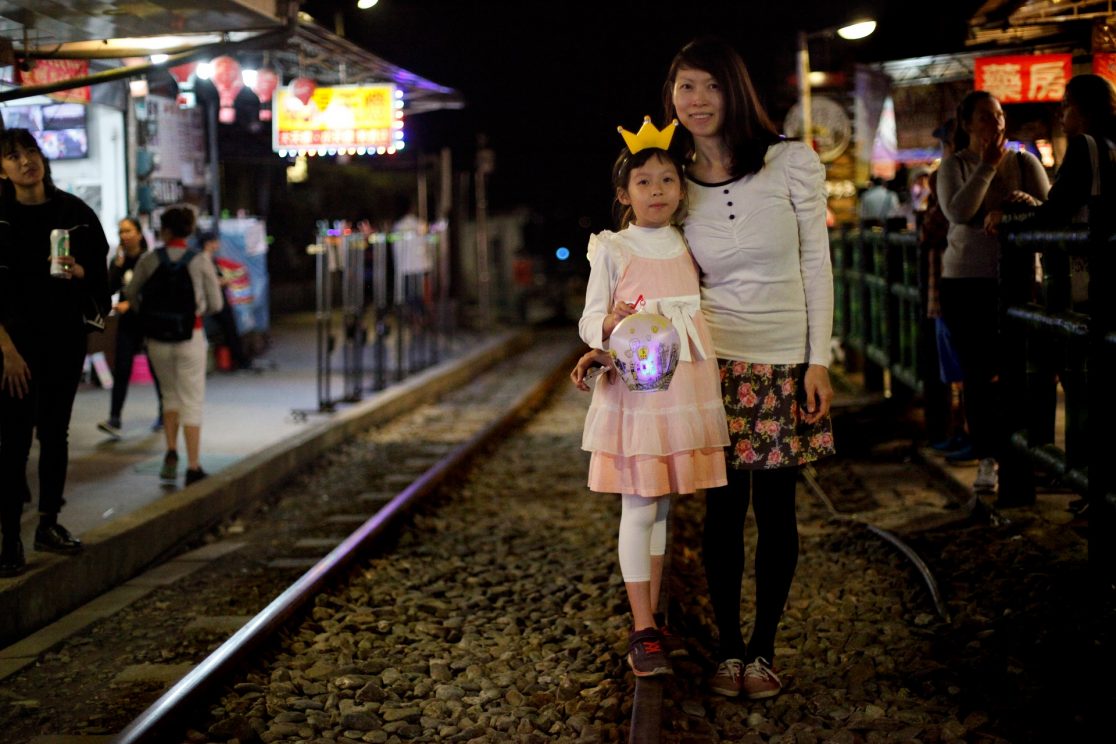 After reading a story about sky lanterns, eight-year-old Uni You asked her parents to visit Ping Xi. It is also the first day of her new school semester. She dresses up and travels with her parents from Yilan to Shi Fen by train. Her parents help her choose a small hand lantern to walk with. They chose the LED lantern with 'Shi Fen' printed on it. 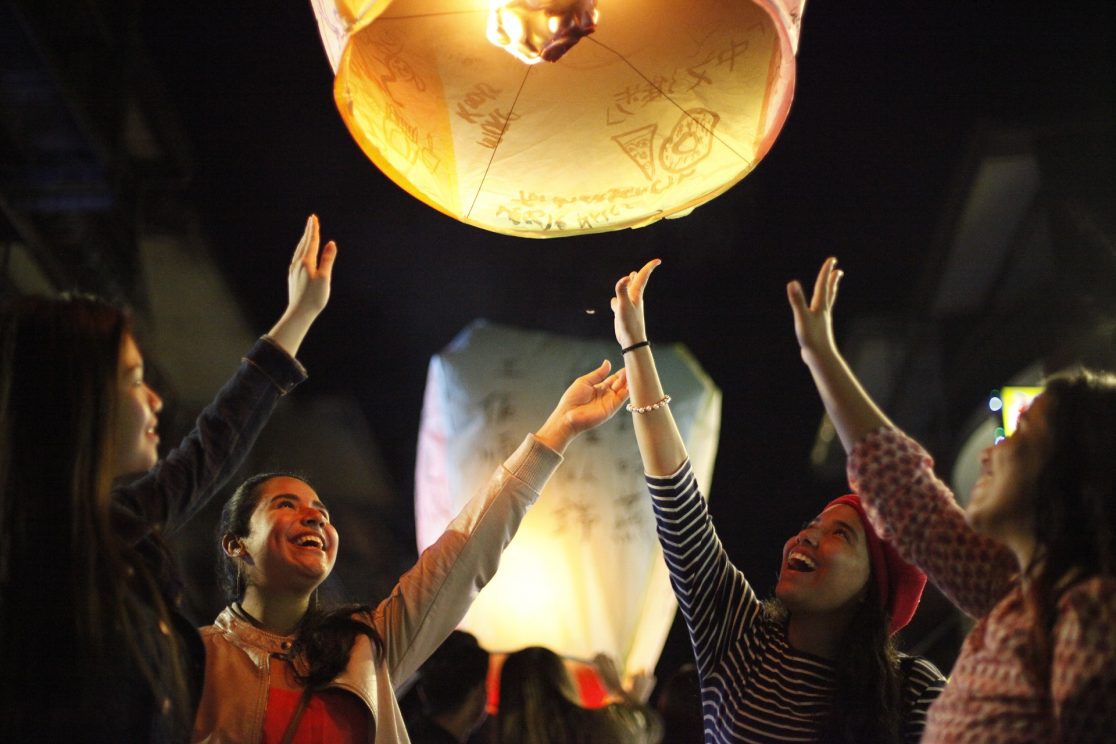 Margareth, Mitzuris, Michelle and Lizeth, students from Panama and Indonesia release their flying lantern painted and handwritten with their wishes. There are wishes about studies, traveling together, working out, enjoying different cuisines, relationships and happiness. 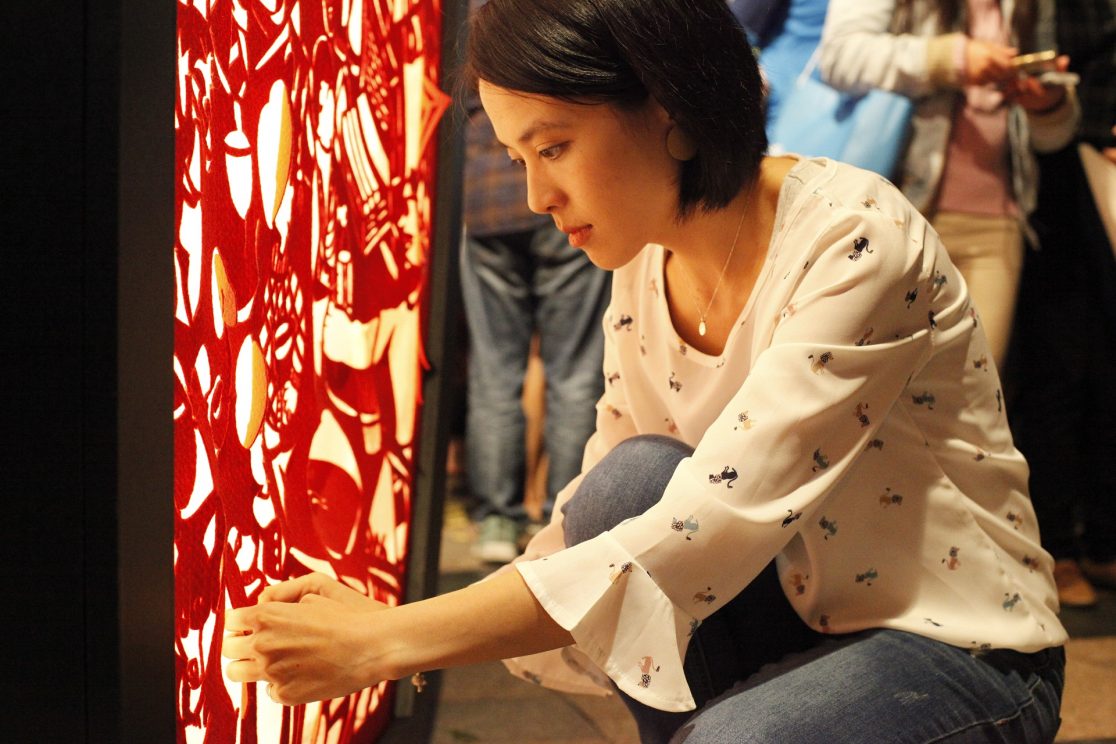 Paper-carving artist Johan Cheng uses needle and strings to fix her cloth carving installation that was damaged by the crowd. The lantern-shaped, tunnel-like installation 'Back To The Times That We Hold Hand Lanterns' was made by Cheng and her seven students as felons in Taipei Prison. 'In a class where I asked them to carve anything on paper while imaging having their last month in life, everyone carved pictures relating with their family,' Cheng said. Having grown up in Taipei and having sweet memories of lantern festivals and carnivals with her grandmother, she contributed her two works to Taipei Lantern Festival for the first time. 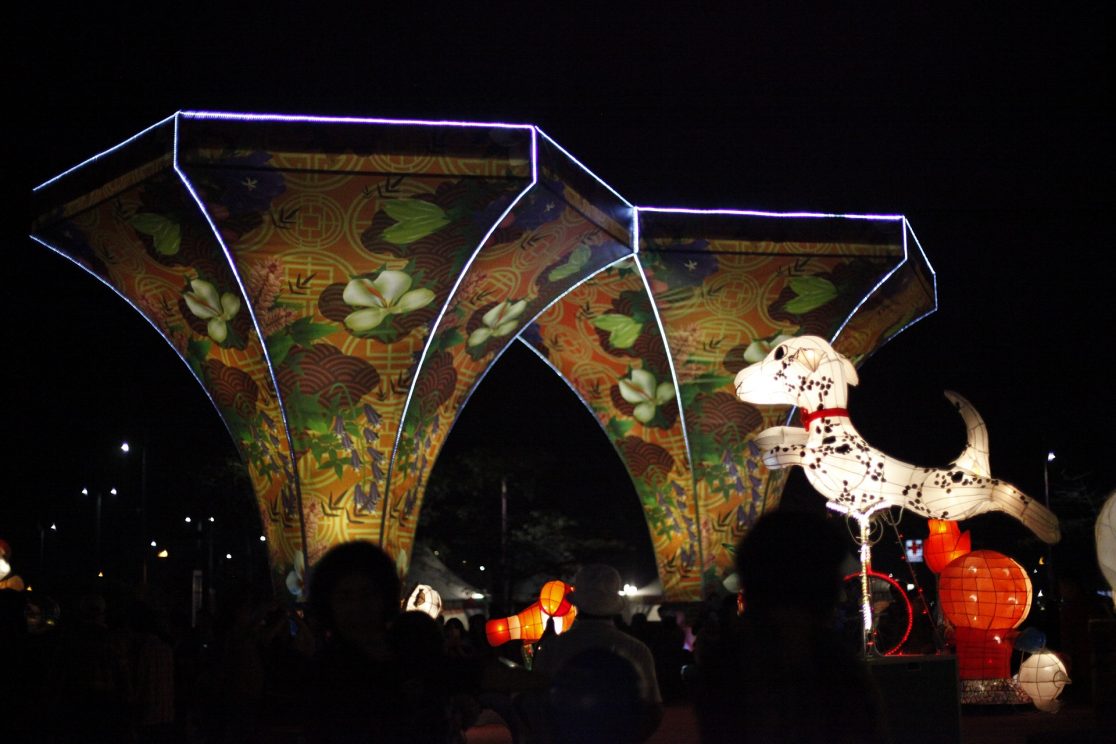 A Dalmatian dog lantern, lit by LED lights, jumps up among many other dog lanterns in front of the Reception Gate of the Taiwan Lantern Festival. It is made by elementary school children in Chiayi which is hosting this year’s main fairs and carnivals. Inspired by the 'hundred-flower' decorative graphic of the National Palace Museum, the shape of trunks features the divine giant trees in Ali Mountain in the county reaching out their branches. The patterns of blossoms symbolise local flowers of Chiayi. 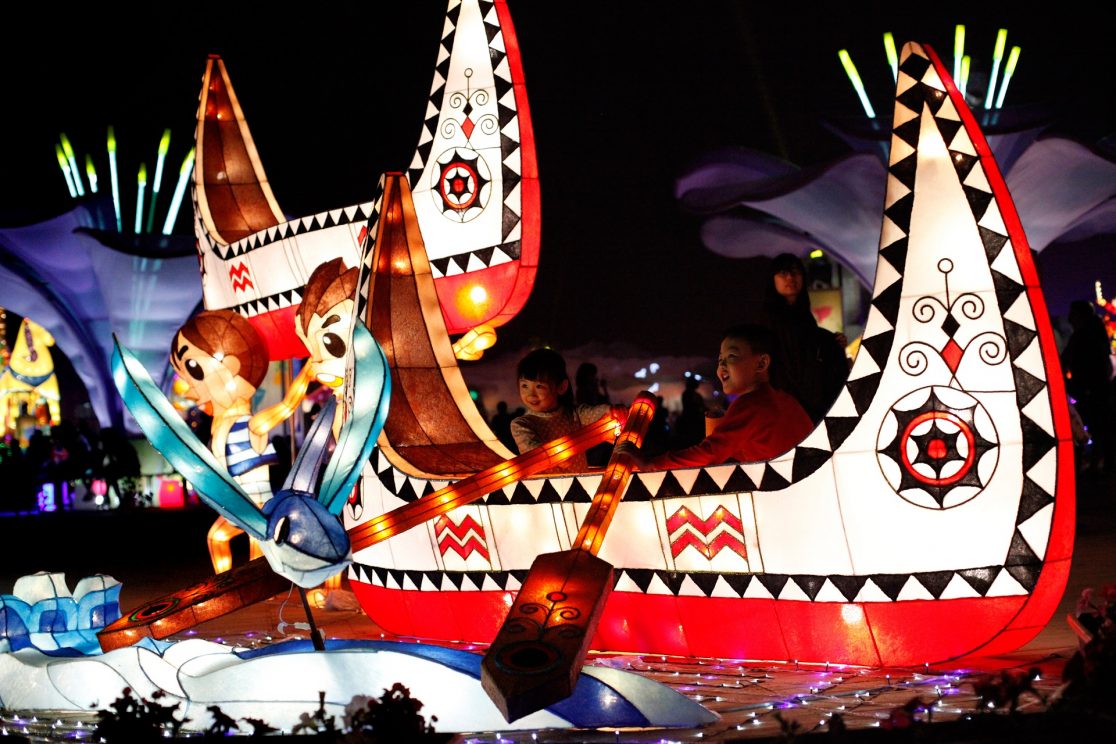 Children sit and play in one lantern shaped as 'Tatala', the boat made by the Tao, an indigenous group that lives on the Taiwanese island of Lanyu in the Pacific Ocean. This year’s Taiwan Lantern Festival features a main lantern that depicts an indigenous, smiling child being accompanied by his loyal Taiwanese dog, while they stand atop Ali Mountain overlooking a sea of clouds. 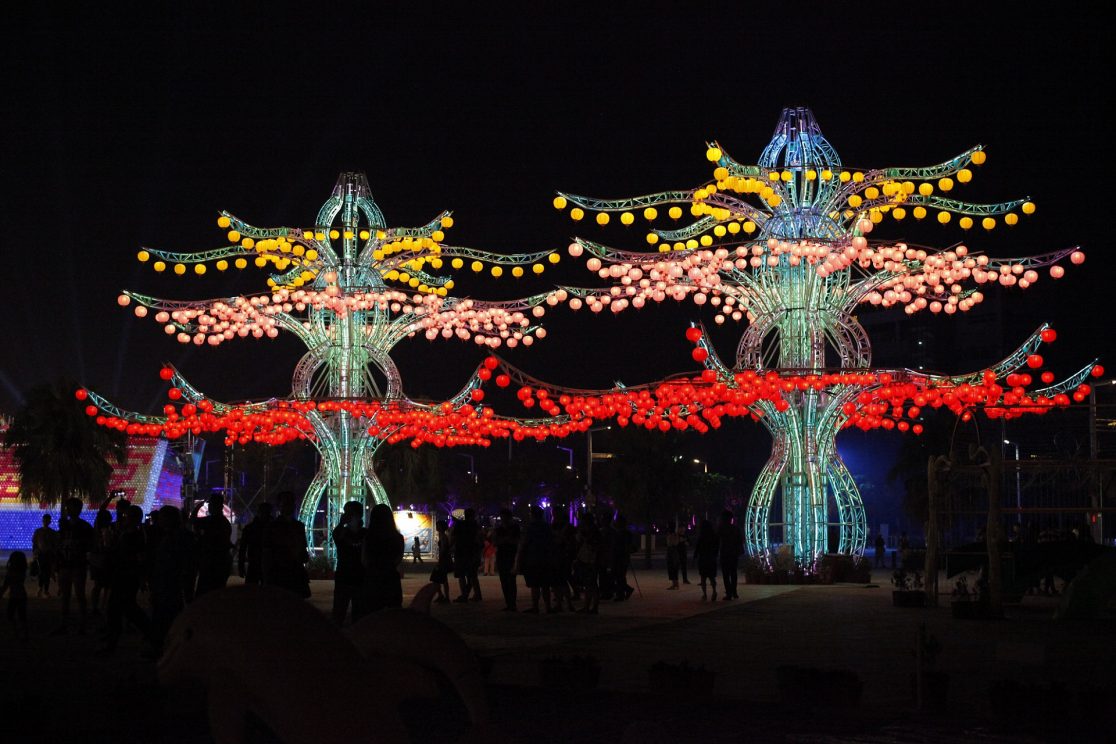 People walk under several traditional ball-shaped lanterns hanging on the intertwined branches of trees lit with modern lighting and design. Inspired by hand-dyed Indian tapestry art from the National Palace Museum’s collection, 'Tree of Life' suggests the festival’s vigour and growth each year. 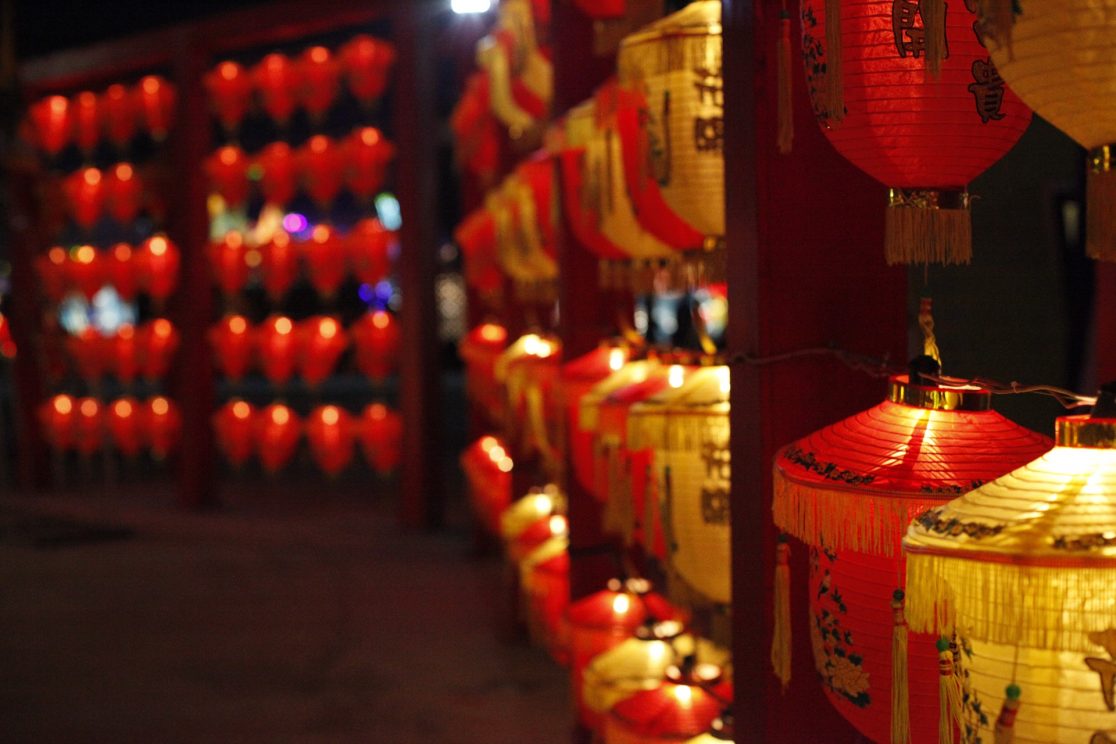 "Fortune and honour come with blooming flowers" is written on bucket-sized lanterns hanging on the walls. Traditional lanterns are commonly seen in special zones for temples and shrines that participate in the fairs and carnivals. 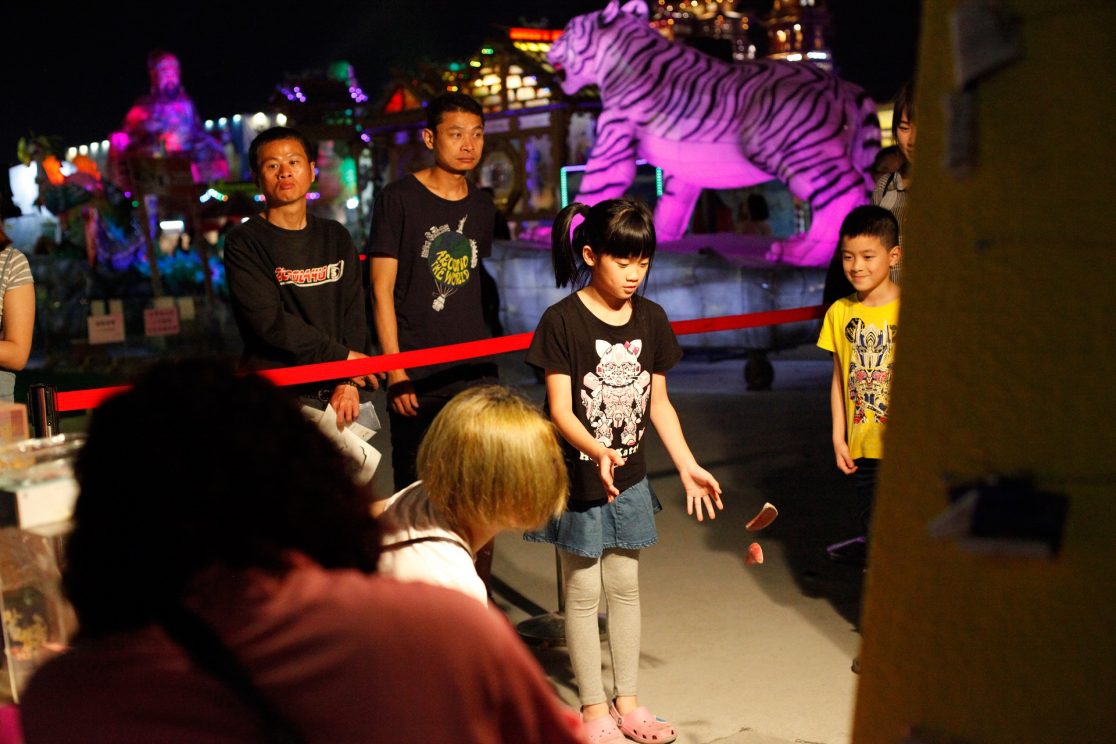 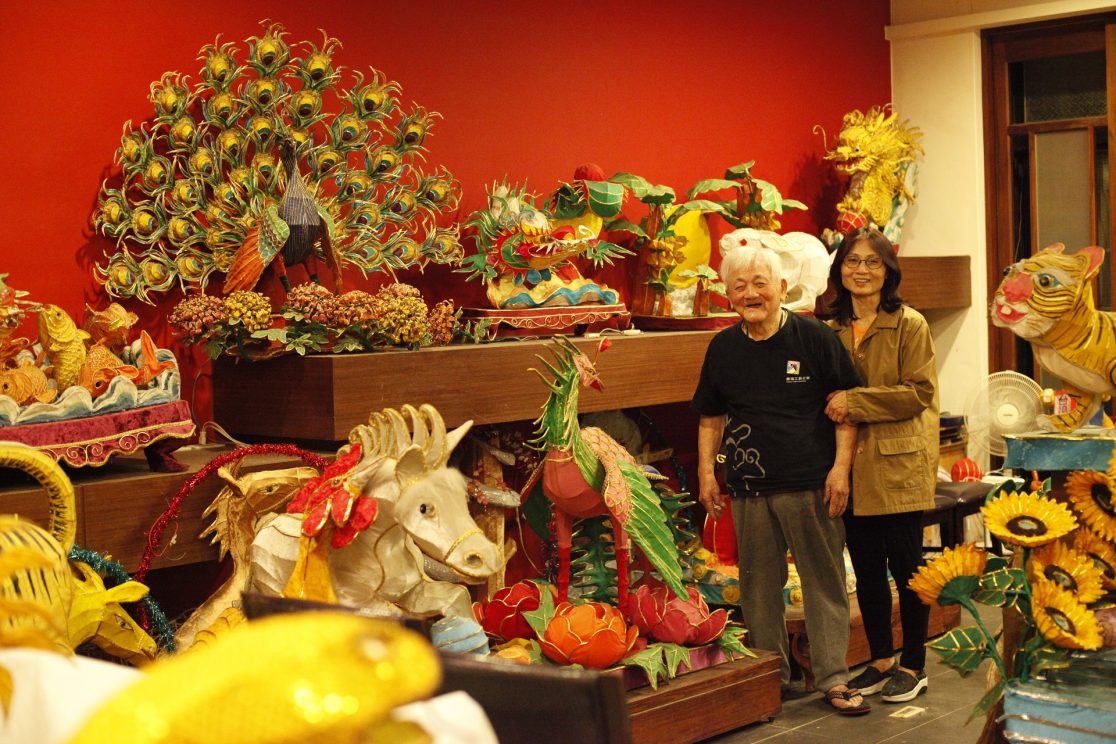 The 92-year-old lantern craft master, Zai Gan Hsiao, still remembers the days when people used to put oil lamps carefully into traditional lanterns, and when lantern-making was suppressed and banned along with other Taiwanese cultures by martial laws. His studio is full of groundbreaking and award-winning early works which he and his daughter called 'small ones'. His wife and four children used to help him with huge lanterns for different fairs and carnivals every year. 'Due to the amount of work, we would postpone our New Year’s Eve family reunion dinner until after the lantern festival,' his daughter said. Peacocks, dragons, phoenixes, dragon fish and lions are among his most favorite works. 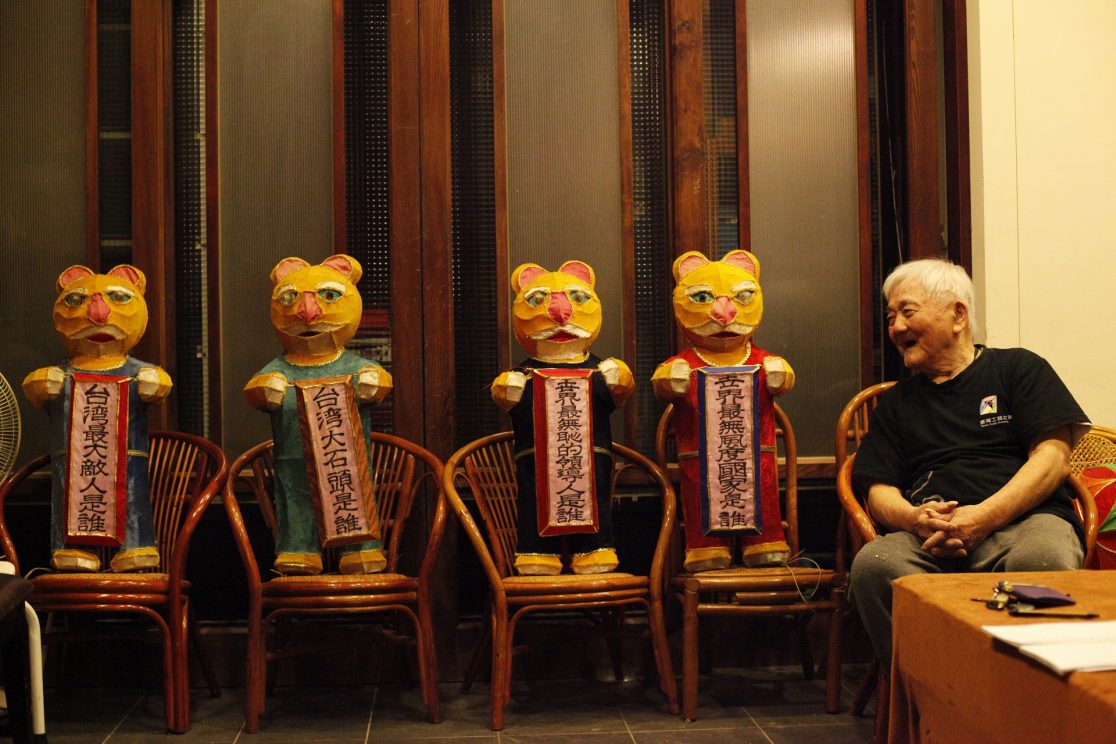 'Laser shows are new for me but they are amazing,' Zai Gan Hsiao said, adding that he will keep making traditional lanterns regardless of his age. He emphasised that 'life has just started'. Hsiao would keep lanterns at home if he was unable to finish them on time. These four tiger lanterns, made eight years ago, were ornamented with witty questions that represent his beliefs, and stand on four chairs in his studio at all times.